Inflation – Should We Be Concerned?

Inflation – Should We Be Concerned?

Imagine two trains headed directly toward each other on the same track—their names: Inflation and Deflation. Which one will win?  Aaron Kennedy, CFA®, CFP®, CLU®, CHFC®

You may have noticed the price of goods has gone up, some dramatically. There is no denying that we are seeing inflation today. There is no doubt that there are many questions around this and there should be. But should we be concerned? How much will the cost of goods ultimately increase? How long will this continue? How can I afford it?!

If you are in the market for a big-ticket item, you probably have sticker shock. Prices are up—across the board. The June numbers were the largest surge in 13 years. The consumer price index rose 5.4% from a year earlier. There was a 0.9% rise in just one month.

If we use the cost-of-living increase for Social Security as a measure, there is an estimate that the 2022 number may land at 5 to 6 percent. This is compared to the whopping 1.3% for 2021. That is significant and scary. Or is it?

When fear sets in there only one move to make—logically, that is. Look at the facts.

The inflationary pressure is easy to identify. First, the government keeps pouring more and more money into circulation. Wages are going up. The supply for key materials is low. Manufacturing and raw material conversions are behind. Our population is growing. Our national debt is higher than it has ever been.

Gone are the days when the business man puts on his suit, travels half a day to his meeting with his flip chart and brief case, and sits in a room with others who have had the same routine. Gone are the days when you go to the local nickel and dime store for your every need. Today is all about how fast one can dress from the waist up for a Zoom meeting and during a break order a few Prime items on Amazon, which by the way, may come from half way around the world.

Now, what is in those scenarios that speaks to inflation? Remember the basic economics of supply and demand. Demand is going down in many areas and apparently for the long-term. We have developed an alternative way now to accomplish the same things with a lot less… less stuff, less time, less travel, less money….

The last time inflation was a concern was in 2011. Oil prices were over $100 a barrel and food prices were soaring. Fed Chairman Ben Bernanke kept calm and basically said “carry on.” He felt that the inflation was only temporary and his policy was to keep money supply loose. He was right.

In a similar vein, Fed Chairman Jay Powell is saying the same thing today. Will he be right?

Take a look historically as well. Although history doesn’t always repeat itself, what can we learn? 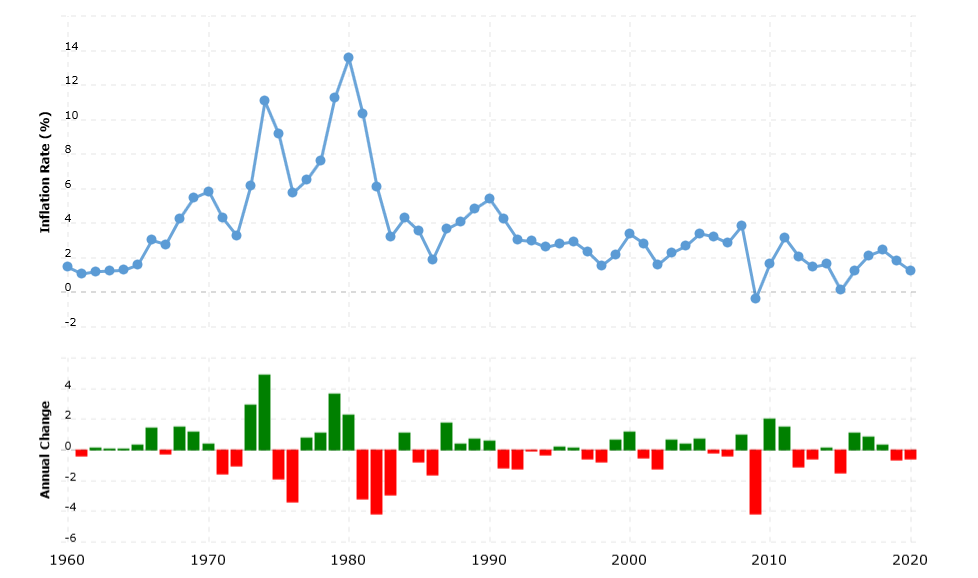 In the end, predicting economics is like predicting the weather. How many weather forecasters actually get it right? Yet there is an adage that says, “don’t fight the Fed.”  In other words, does your investment strategy align with the current monetary policy?

Interest rates are not going up. The Fed isn’t raising rates and treasury yields have gone up from early this year. 1 trillion in infrastructure spending just passed the Senate and many say this opens the door wide enough to see another 3.5 trillion in spending. Yet on the flip side, we will most likely see a tax increase.

As in many things, there is often a short-term answer and a long-term answer. Today is no different. The bottom line is this: the more things change, the more they stay the same. This blip in history is just that—a blip. Don’t let your emotions get in the way of logic. Be proactive, keep your disciplines, and stay the course.